Dr. Asana Andiappan and his team came to our institution to perform yoga research on various asanas and Pranayamas. The acceptance of Yoga Therapy in medical science gained a lot of momentum in the past two to three decades and suddenly peaked up in the past 2-3 years. That each and every component of Yoga is useful for preventing and treating a number of acute and chronic illness is proved by many recent scientific studies. So far as articles are concerned-a huge number are available but for acceptance as a branch of medical science such data creation is of paramount importance and awaited.

The disease or conditions that can be treated by Yoga Therapy, a component of Yoga or Yogic life-style are listed below.

The evidences are available in the forms of published scientific works and can be provided on request: 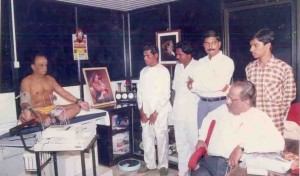 Under medical supervision, their blood pressure, pulse rate, and respiration were noted down, before, during and after each asana.

There is a general trend  showing an increase in heart rate by average of 10beats/minutes and systolic blood pressure by 10mm Hg during asanas which do not involve deep breathing, where as asanas like Halasana and Yoga Mudra in addition to increases in systolic pressure ,there was an increase in diastolic blood pressure by 10 mmHg which returned to normal within one minute after these asanas.

Before and after all asanas, there was an average increase in respiratory rate by 4/minutes.This was followed by cardiac imaging and Doppler flow across mitral tricuspid and aortic valve and Carotid Doppler where ever possible. Asanas like Savasana, Padmasana did not alter Doppler flow measurements significantly. 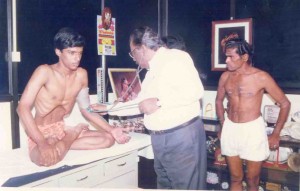 In Bandhas & Kriys like Nauli, Utiyana and Maha Bhandam we could not record the Doppler because of the Posture adapted and of the wide movements of the chest during the procedure. To overcome this difficulty this we tried to see the left ventricle(LV)cavity before, during and after each of the above-mentioned asanas, which uniformly showed an acute decreased in LV and LA size along with an increase in heart rate to return to normal size after the end of the performance.

This would mean that during rapid breathing, during contraction of the abdominal wall towards the spine and during breath holding, there is an acute decreases in venous return towards the heart resulting in reduction of size of LV and LA and venous return becoming normal at the end of the procedure restoring the adequate ventricular filling of the chambers, making them return to their normal size Again. 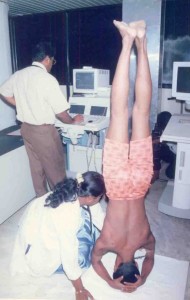 In Asanas like Vibareetha Karani, Halasana there is an interesting phenomenon of acute dilation of the Internal jugular vein on both sides with low Doppler velocity which returns to more than the normal velocity of Doppler flow of both veins after cessation of posture.

This would mean that there is an acute buckling of the internal jugular veins during these two postures resulting in acute distension of both jugular veins. Return to normal posture relieved the buckling posture and the flow is twice the normal flow towards the heart.

During these asanas, there is no appreciable change in Carotid Doppler flow. During Sirasasana, after a lag of 30 seconds, the diastolic flow velocity in both the carotids was obviously increased compared to rest and it takes at least 30 seconds for the flow to return to normal level after cessation of the posture.

When one compares the above mentioned hemodynamic data observed during various Asanas to dynamic exercise, this is an appreciable difference.

The heart rate and systolic blood pressure are not appreciably increased in line to the duration of posture But during dynamic exercise, because of vasodilation and because of rapid breathing the venous return to the heart is considerably more.

The systolic blood pressure linearly increases because of increasing stroke volume depending upon the intensity of Dynamic exercise and duration.

Whereas in all asanas, few are of isotonic type, rather than isometric exercise which tone up and squeezes the muscle and indirectly empty the venules.

The exercise which involves deep breathing act like a bellow creating a negative pressure in the lung, initially decreasing venous return and ultimately such more blood at the end of the procedure. 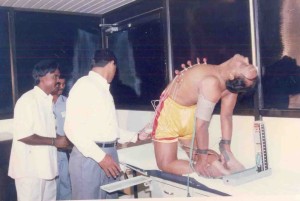 In short most of the asanas try to tone up the segmental muscles and aid their venous return fully and causes gushing in of arterial blood after the end of the procedure.

The Sirasanas even though has no influence on systolic pressure, diastolic flow in both the carotids which may be secondary to fail in the cerebrovascular resistance during the ‘Sirasasana’ posture.

In short asanas aid dynamic exercise, aid massive venous return in asanas which involves deep breathing and an increase in intra abdominal pressure after the cessation of the exercise.

In the past three decades, a considerable amount of medical research has been carried out on Meditation and Yoga, exploring its clinical usefulness, physiological consequences and the mechanism of action. The effect of Meditation on the neuroendocrine system, the cardiovascular system, the respiratory system, and the muscular system have been studied in depth by the medical scientist’s number of times. The stress-related condition are more benefited by Meditation.

Click here to read how Yoga Therapy helps address various diseases. With over five decades of yoga teaching experience and rigorous research, our methods of applying  Yoga as Therapy for various ailments are not only preventive but also curative.